There is a food awakening going on. More people are tuning into the health and environmental threats from genetically modified organisms (GMOs). The scientific evidence linking GMOs to allergies, infertility, digestive disorders, cancer and more is growing. Sixty four countries and counting have banned GMOs, or mandate they be labeled.There is power building in States to take back our right to know what we are eating...and the biotech companies are running scared.
In rapid response to the press conference held by Linda B. Rosenthal February 4 in Albany, calling for the labeling of GMO foods in NYS, Monsanto and the biotech industry are charging ahead for the introduction of a federal bill to pre-empt all future GMO labeling measures at the state level. Monsanto and The Grocery Manufacturers Association (GMA) have even formed an alliance to further mislead the public called the “Coalition for Safe and Affordable Food.” With about 30 states having introduced GM labeling legislation, the biotech industry is desperate to take control of the labeling conversation.
The federal bill written by The GMA and supported by the Coalition, would not require any mandatory GMO labels; it would only state that companies are free to voluntarily label GMOs.  If passed, the law would erroneously allow GMO food to be deceptively labelled as “Natural” in yet another attempt by the biotech industry to misinform the public. Genetically modified crops could never occur in nature. They are new, never before seen plants created in labs. The fact that these crops are made by humans, is exactly the premise that companies like Monsanto used to gain patents and intellectual property rights on life (it is illegal for any corporation to patent a natural occurring life form). Please take action- Click here to tell the FDA- We reject watered-down, voluntary federal GM labeling rules.
About 75% of All Food in a Supermarket Has GMOs 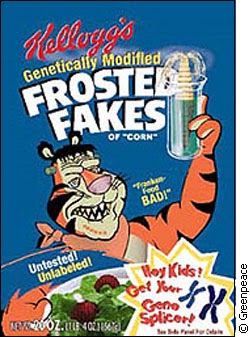 The biotech industry has been content to use the public as guinea pigs in the massive food experiment that they have been conducting since 1996.  Now that consumers know that our grocery stores are filled with unnatural, under-tested, patented, genetic mutations, we are demanding that these GMO ingredients be labeled with the words “Genetically Engineered” on the package.  We want to actively choose what we eat and feed our family.

However “Coalition for Safe and Affordable Food” does not want consumers to be educated. They are afraid that if people can clearly see what they are eating by reading a label, they will reject GMO food and demand food companies switch back to natural food ingredients.  Monsanto and biotech producers do not want that because they want to continue making inflated profits off of GMO patents and royalties, GM seeds that have to be purchased each year and the escalating sales of their toxic Roundup that can be sprayed more heavily on GM herbicide-resistant crops (and now that superweeds and superbugs are developing resistance, the companies get to profit from selling even more toxic herbicides like 2,4-D and diacamba, that have been linked to neurological disorders and cancer in humans).

For Monsanto et al to continue to rake in billions, they have to keep you in the dark and force you to be their customer whether you want their inferior food substitutes, or not. 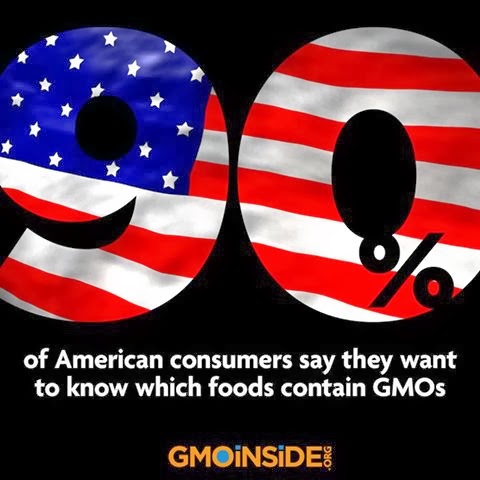 Monsanto and other agrochemical/pesticide and biotech companies, junk food manufacturers and the GMA spent almost $70 million dollars to campaign against GMO labeling in California and Washington State. There was an avalanche of deceptive ads that led the the public to believe that their food prices would increase by as much as $825 per year (GMA must have thought that didn't sound bad enough, so now they say it will cost $1,600 more a year) if GM labeling becomes law.

All the arguments put forth by the anti-labeling campaign have proven to be false. With about 90% of Americans in support of labeling GMOs, the biotech industry knows it can’t continue to spend tens of millions of dollars in every state to stop us from knowing the truth (breaking news- CA introduced another GM labeling bill yester- day!)
Monsanto and the GMA Want to Deny You Your Right to Know
The Grocery Manufacturers Association has responded to the people by threatening the first state to pass GMO labeling with a lawsuit.  While the suit would not hold any weight, Monsanto and the GMA are promising to waste taxpayer money by keeping any state with a labeling law embroiled in a costly legal battle that “will probably be decided by the Supreme Court.”  They are using the Supreme Court as an additional threat because Supreme Court Justice Clarence Thomas is an ex-Monsanto lawyer who has a history of overturning court decisions so that they are in favor of Monsanto. 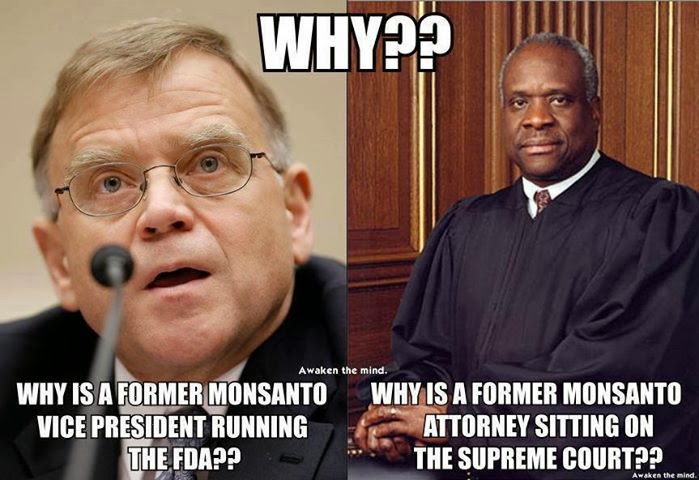 Federal government’s collusion with Monsanto does not end with Clarence Thomas. The Coalition for Safe and Affordable Food is pushing a toothless, voluntary labeling law at the federal level because ex-Monsanto vice president Michael Taylor and former "Biotech Governor of the Year" Tom Vilsak head up the FDA and USDA respectively. This is a huge conflict of interest to the American people. The FDA functions simply as rubber stamp in regard to GMOs, with no testing or independent safety analysis done on the unnatural organisms.  Since our federal government is a revolving door for Monsanto executives, biotech companies have the help of many Senators to get their phony labeling law passed. The actual purpose of the law is stop the real labeling initiative taking place in more that half of states across the US. If Monsanto and their cronie front groups can get labeling to be decided by the FDA, they have their corrupt work cut out for them.

We cannot let that happen. We, at Hudson Valley for No GMOs will continue the fierce fight to know what we are eating by demanding the enactment of mandatory GMO labeling in New York State in 2014. Please join us. 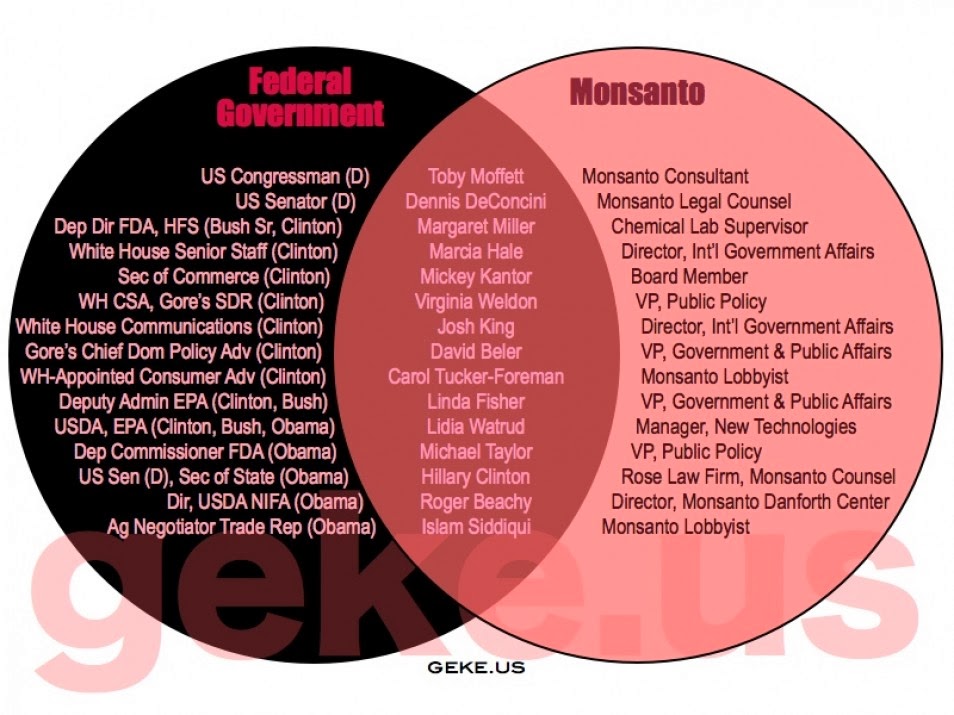 Posted by Barbara Upton and Beth Dulay at 2:16 PM 1 comment:

About twenty people representing farmers and health and environmental organizations, including Hudson Valley for No GMOs, traveled to Albany last week to meet with legislators who sit on committees crucial to passing a GM labeling law in New York this year.

We are happy to announce that as a result of these efforts, we have five new co-sponsors for the  bipartisan bill that would require labels for food containing GMOs (genetically modified organisms)! Legislators and staff were interested, engaged and often acknowledged that most in their districts were in favor of labeling (studies show that 93% of Democrats, 90% of  Independents and 89% of Republicans want GMOs labeled).

A big thank you to the newest co-sponsors of A3525; Assembly members, David Weprin, Thomas Abinanti and Edward Ra and of S3835; Senators George Latimer and Bill Perkins. Here is a complete list of the 50 Assembly co-sponsors and the 12 Senate co-sponsors.

We are also most grateful to the sponsors of the GM labeling bill, Democratic Assembly member Linda Rosenthal of Manhattan and Republican Senator Ken LaValle of Suffolk. They are pictured below with Assembly member Jeffrey Dinowitz, chair of the Assembly Committee on Consumer Affairs and Protection, voicing his support of the bill. Behind them are Connecticut State Representative Tony Hwang, a Republican and prime sponsor of Connecticut's recently passed GMO labeling law and Dr Michael Hansen, a senior scientist for Consumer's Union, who spoke about the health risks associated with GM foods. One example he cited was a 2013 pig feeding study that showed higher rates of severe stomach inflammation in pigs fed GM grain.


We are only asking for what almost all of the industrialized world has- the fundamental, democratic right to know what we are eating and feeding our families. A total of 64 countries, including the EU, Russia, China, Japan, Australia, Brazil, Kenya, Saudi Arabia and more all have GM labeling! GM labeling allows consumers to make informed choices and allows traceability and accountability of health effects from eating GMOs. Some countries ban GM crops totally or in part, because of concerns about harm to human health and the environment.

You Are Needed!
If you are serious about having the right to know, we need you to make calls to your state legislators today. GMO Free NY, leading this effort, makes it easy for you. Please click here - call and simply tell them you want GM labeling (A3525 and S3835) in NY this year. The Monsanto and junk food lobbyists are already coming out in force against labeling, and to counteract them we need thousands of concerned citizens to make their feelings known. Thank you!

And finally, a big thank you to Stacie Orell, campaign director of GMO Free NY and head of the GE Labeling Coalition. She has been a tireless advocate for GM labeling and we appreciate her leadership!

It is especially important to call assembly members and senators on the Consumer Protection Committees (scroll down). They are the gatekeepers of A3525 and S3835. The bill needs to be pushed out of their committees to go for a full vote. If Terry Gipson is your state senator, it is particularly important that you call him (845 463-0840) as he is a member of the Senate Consumer Protection Committee.


New York could be the first state in our country to have a GM labeling law without restrictions! (Connecticut and Maine have both passed GM labeling, but other neighboring states have to also pass such laws for them to kick in). With your help, WE CAN DO THIS!

We made the news- Sponsors of GMO bill Predict Victory over Monsanto. Tune into this site tomorrow for "Why Biotech Is Running Scared."

Keep Faith!
Posted by Barbara Upton and Beth Dulay at 9:48 AM 2 comments: