Ban Roundup - Linked to Rising Kidney Disease in US and Abroad

We usually only post the most recent articles here, but think this one from March of this year, has not received the attention that it warrants. A study in a peer reviewed journal, showed that Roundup is linked to a fatal chronic kidney disease in farming communities in Sri Lanka (Roundup banned) El Salvador (just passed a ban on Roundup) Costa Rica (2/3 of the country banned GM agriculture) and Nicaragua (where there was a ban- but looks like government stepped back from it).  Brazil is also trying to ban Roundup

The rapid expansion of GM agriculture in our country, most of which is engineered to be Roundup Ready, has resulted in glyphosate polluting the air we breathe, the water we drink and has been found in the breast milk of 3 out of 10 American mothers (at levels 760 to 1600 times higher than what the European Drinking Water Directive allows for individual pesticides). In farming regions, glyphosate is in the rain that falls and in the urine of the people.

Renal failure death in the US has doubled over the past thirty years. Hospitalization for acute kidney injuries in the US tripled from 1996 (the year Roundup Ready crops were first planted) to 2006 and death rates from Kidney and Renal Pelvis Cancer increased by 50% from 1998 to 2008.


When is the last time you heard this discussed in MSM? Please share. 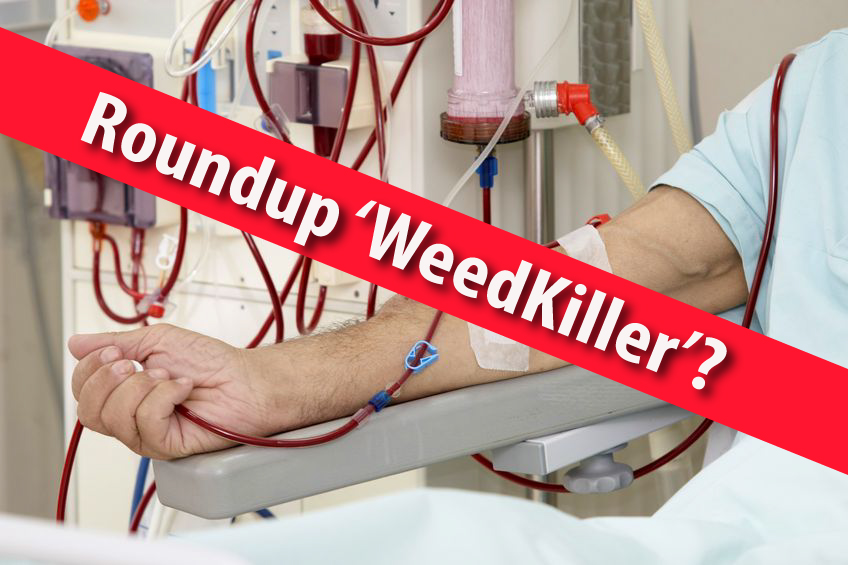 Last month, we reported on a mysterious global epidemic of fatal , focusing on a study published in the International Journal of Environmental Research and Public Health1 that laid down evidence showing the herbicide Roundup () is responsible for an epidemic of kidney-related deaths in a rural farming region of Northern Sri Lanka, as well as other rural regions around the world, including Costa Rica and Nicaragua. You can review the report here: Roundup Weedkiller Linked To Global Epidemic of Fatal Kidney Disease.

This information, while shocking to many who still consider glyphosate herbicide and the GM food produced with it to be relatively non-toxic, is not surprising to those who have been the published research on glyphosate's wide ranging harmful effects, and which now shows a link between glyphosate and several dozen health conditions. You can view the first-hand toxicological citations here: Adverse Health Effects of Glyphosate Formulations.

Only days ago, The Center for Public Integrity released a report titled, "Sri Lanka bans Monsanto herbicide citing potential link to deadly kidney disease," citing Sri Lankan President Mahinda Rajapaksa's March 13th decision to impose an outright ban on glyphosate. This decision follows a decision by the legislature in El Salvador last September to approve a ban on glyphosate, but the proposal has not yet been signed into law.

Now that the world seems to be paying closer attention to the fact that the primary agrichemical used in the farming of genetically modified crops has deleterius, if not deadly, consequences to exposed populations, including kidney harm, it is only logical to ask the question if the US, which has the highest amount of glyphosate usage in the world, is also experiencing kidney harm as a result of widespread daily exposure.

A series of graphs based on data from the USDA, National Cancer Institutes, Centers for Disease Control, have recently surfaced, depicting at steep rise in the rates of kidney disease in the US from the time of the introduction of glyphosate and GM food, reveals that the US may also be suffering from an epidemic of glyphosate-linked kidney damage.

The first graph below depicts the 'Age Adjusted Acute Renal Failure Deaths' in the US from 1981 to 2009 plotted against the percentage of GE soy and corn planted, and the tonnage of glyphosate applied to corn and soy, showing death rates more than doubling over the past 30 years.

The second graph depicts the 'Number of Hospitalizations for Acute Kidney Injury' in the US plotted against glyphosate applied to corn and soy, between years 1990-2010. Within a single decade (1996-2006), hospitalizations due to acute kidney injury had more than tripled. 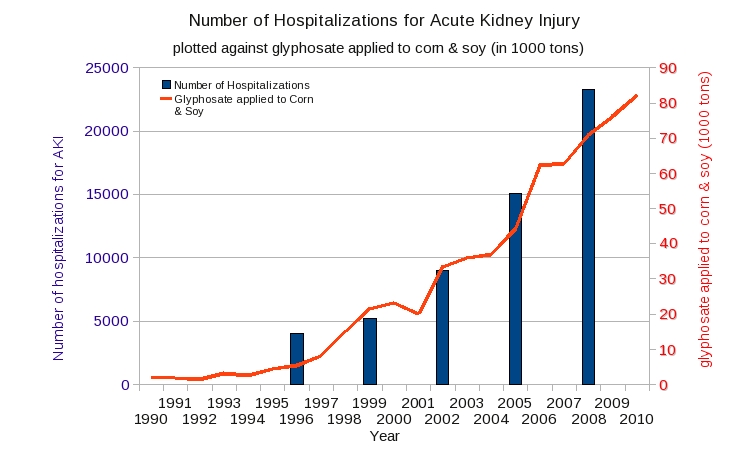 The third graph depicts 'Kidney and Renal Pelvis Incidence' in the US, plotted against the percentage of GE soy and corn planted, and the tonnage of glyphosate applied to corn and soy, showing death rates increasing by 50% between 1998 and 2008.

The implications of this data are highly concerning. The steady increase in acute and chronic in the US population dovetails so closely with the increased use (and therefore human exposure) to glyphosate and glyphosate contaminated food, that it is hard to write off the correlation as coincidence.

In previous articles, we have examined the evidence showing that is accumulating in our air, rain, groundwater, soil, food, and even persists in the seawater where it may be killing our coral reefs. Far from the 'highly biodegradable,' 'virtually non toxic' chemical it was once marketed to be by its creator Monsanto, it is now known to persist in a way that makes daily exposure inevitable, and which accumulates with time, as its use increases each year.

In fact, the entire basis for arguing for the substantial equivalence of GMO and non-GMO foods is that glyphosate possesses negligible toxicity. The GMO biosafety debate normally revolves around whether the novel transgenes inserted into the plants produce problematic proteins or insecticidal compounds that have adverse, non-target adverse health effects on humans.  If glyphosate is toxic in extremely low concentrations (as low as the parts per trillion range), then any food produced using glyphosate (and which is therefore contaminated with it, or its equally toxic metabolites, such as AMPA) will not be equivalent in safety to the non-GMO/conventional/organic food which is free of such residues.

As the increasingly educated world comes to understand the inherent and extreme dangers of glyphosate formulations like Roundup, there will be increasing momentum for the consumer to move supplicating the 'powers that be' for lapdog like permission to have GM-containing products accurately labeled, to recognizing the underlying infrastructure of GMO agriculture is slowing altering (via GMO transgene biopollution) and killing the biosphere via wide-ranging agrichemical destruction. In other words, the rallying cry now is to 'Ban Glyphosate and GMOs!'