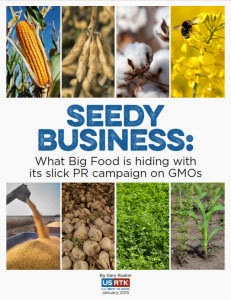 Since 2012, the agrichemical and food industries have mounted a complex, multifaceted public relations, advertising, lobbying and political campaign in the United States, costing more than $100 million, to defend genetically engineered food and crops and the pesticides that accompany them. The purpose of this campaign is to deceive the public, to deflect efforts to enact GMO labeling that is already required in 64 countries, and ultimately, to extend their profit stream for as long as possible.

This campaign has greatly influenced how US media covers GMOs. The industry’s PR firm, Ketchum, even boasted that “positive media coverage has doubled” on GMOs.
The report, titled Seedy Business: What Big Food is Hiding with Its Slick PR Campaign on GMOs, outlines fifteen things that Big Food is hiding with its artful PR campaign on GMOs.
The full report is available at www.usrtk.org/gmo/seedy-business/.