GMOs Are Wrong Way to Feed the World

by Barbara Upton
Hudson Valley for No GMOs in the News Continued
Original Source: http://www.poughkeepsiejournal.com/story/opinion/valley-views/2015/05/09/gmos-wrong-way-feed-world/27051605/
If you think GMOs (genetically modified organisms) are safe and needed to "feed the world," then Monsanto's PR firm, that also told us smoking was fine for us, is doing a good job. Let's set the record straight. Your health, and that of your family, and our environment depend on it.
Three hundred independent, scientific researchers say there is no scientific consensus on the safety of eating GMOs and called the risks shown in independent research a "serious cause for concern" (). They point out that most of the studies concluding they were safe were carried out by the biotechnology industry.
Animal feeding studies in peer reviewed journals show GM-fed animals have myriad health problems, such as, more liver and kidney toxicity, severe stomach inflammation, higher cancer risk, premature death, reproductive problems (GM-fed hamsters were infertile by the third generation) and more.
You will probably be surprised to learn the  does no safety testing at all on GMOs! They rely on the industry, that stands to make big profits from them, to tell us they are safe. The history of how GMOs were approved is also disturbing. FDA scientists in the early 1990s warned that GMOs could cause new allergens, new toxins, nutritional problems and new diseases, but they were overruled by a political appointee with ties to Monsanto. The wolf is still guarding the hen house, and all that is being protected are the profits of the industry.
Genetically modified crops are also causing great devastation to our environment. Almost all GM crops are modified for only two traits. One allows plants to withstand massive applications of the herbicide glyphosate (the main ingredient in Roundup) without dying and the other is to produce a pesticide in every cell of the plant. Bt sweet corn, for instance, has to be registered as a pesticide with the federal , and without a label that is what you could be sinking your teeth into this summer!
Pesticide use has soared with the introduction of GM crops. It has spawned super weeds, choking millions of acres of our farmland, and super bugs, that are destroying the crops that are supposed to kill them.
GM crops will not feed the world, in fact, they are totally unsustainable. Agroecological, non-GM farming, that works with the land instead of against it, has greater yields and is the only true solution for feeding the world according to the International Assessment of Agricultural Knowledge, Science and Technology for Development.
Three billion citizens in the world are given a choice on whether they eat food that contains GMOs or not. We, however are kept in the dark and forced to be a part of what , an expert in the field of genetics, calls "a massive experiment".
We have a good chance for GM labeling in New York this year. Go to GMOfreeNY.net to contact your state legislators. Tell them you deserve and demand to know what you are buying, eating and feeding your family! Also, Congress is considering a radical move that would forever stop states from labeling GMOs. It is deceptively called the "Safe and Accurate Food Labeling Act, " which opponents have dubbed "The DARK Act- Denying Americans Their Right to Know." It shows how the biotech industry not only buys scientists, who tout the "wonders" of GMOs for money, but politicians as well.
This is a fight we can and must win. We are fighting for health, for choice, and for the environment- we are fighting for our lives. Please be a part — check out "GMO Food Fight HeatsUp" http://www.poughkeepsiejournal.com/story/tech/science/environment/2015/05/09/gmo-fight-continues/70895790/  and join Beth Dulay and me at Hudson Valley for No GMOs, HVnogmos.org.
Barbara Upton is co-founder of Hudson Valley for No GMOs. 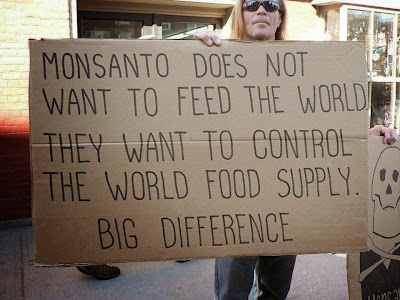 Posted by Barbara Upton and Beth Dulay at 12:36 PM No comments:

Hudson Valley for No GMOs in the News!


What: People Opposed to Monsanto's GMOs, March Against Monsanto
When: May 23
Where: Worldwide, including Albany's State Capitol and New York City
Information: Visit www.march-against-monsanto.com/events/ and www.hvnogmos.org
Non-GMO resources
If you want to try and avoid purchasing food that contains GMOs, the following resources are available:
•The Non-GMO Project: Since the U.S. government does not mandate that food containing GMO ingredients be labeled, some companies have their products independently tested and verified as GMO-free by the non-profit group Non-GMO Project. Before a product can receive the non-GMO verification seal, all of its at-risk ingredients must be tested and contain no more than 0.9 percent GMOs. While companies may strive to be 100 percent GMO-free, due to cross-contamination, it's difficult to reach this goal. Visit www.nongmoproject.org for more information.
•Non-GMO Shopping Guide: The Institute for Responsible Technology has put together a list of products that has been non-GMO verified. It contains information on items such as baby food, pet food, fruits, vegetables, dairy products, meats and more. The pamphlet can be downloaded from the website or you can purchase a pocket guide, www.nongmoshoppingguide.com.
____________________________________________________________________________
Because this is getting long, I'll post my opinion piece in a new post.
Posted by Barbara Upton and Beth Dulay at 12:17 PM No comments: 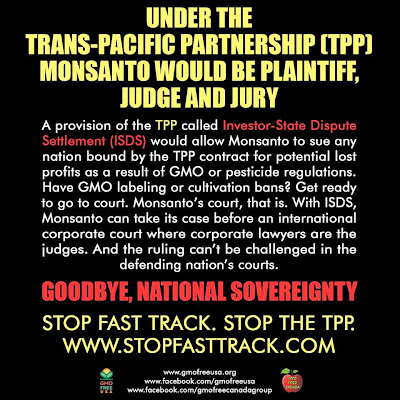 The TPP would give corporations unprecedented power to block laws and regulations that protect American jobs, our public health and our environment. This would be the end of democracy as we know it. Shame on our president for trying to Fast Track TPP through with limited debate and no ability for Congress to amend this disaster.

So far, NY senators are opposing fast track, as is Congressman Gibson. A call to their offices to thank them and tell them to stay strong would be helpful. Capitol switchboard - 202 244-3121. All should call their representatives today- tell them no fast track for TPP!

Learn more about TPP and other action steps you can take below.

now and demand that they vote NO ON FAST TRACK:http://www.stopfasttrack.com/
15 Democrats have struck a deal with Republicans to move Fast Track forward for a vote in the

Senate. This could happen as early as tomorrow morning. But the fight is not over. Don't wait, take

Heidi Heitkamp - North Dakota 202 224 2043
READ: http://www.politico.com/…/trade-bill-standoff-senate-117900…
DO YOU WANT an all-powerful Monsanto? A provision of the Trans-Pacific Partnership (TPP)

Zealand, Peru, Singapore, the United States, and Vietnam) for potential lost profits as a result of

GMO or pesticide regulations. Have GMO labeling or cultivation bans within your borders? Get

ready to go to court. Monsanto’s court, that is. With ISDS, Monsanto can take its case before an

international corporate court where corporate lawyers are the judges. And the ruling can’t be

GOODBYE, NATIONAL SOVEREIGNTY.
Fast Track (formally known as Trade Promotion Authority) is a power given to the President by

Posted by Barbara Upton and Beth Dulay at 9:13 AM No comments: