"Feed the World. Cool the Planet." A Message of Hope


Which Future of Food and Farming

During the last half-century, agriculture and food systems lost their way, in the darkness and fog created by corporations that made chemicals for warfare, through myths and paid propaganda - that poisons and synthetic chemicals are necessary to feed the world. For the industry it was a matter of extending their sources of profits long after the war was over. For the planet and people, the costs have been tragically high. 75% of the earth’s biodiversity, soils, water have been destroyed, the climate has been destabilised, farmers have been uprooted, and instead of nourishing us, industrial food has become the biggest cause of disease and ill health.
For all the destruction it causes, the industrial food system produces only 30% of the food eaten by people. If we travel further down that road, we will have a dead planet and no food.  We can not eat propaganda; We eat soil, we eat water, we eat biodiversity. And when these vital resources are destroyed, our food security is destroyed.

Please join the new movement Regeneration International- http://www.regenerationinternational.org/
Help them to achieve their mission -
"to cool the planet and feed the world through regenerative organic agriculture" 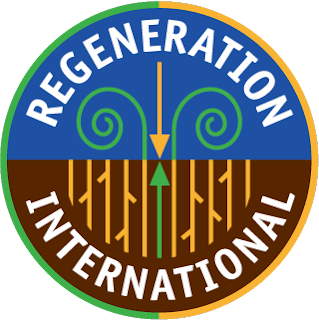 Posted by Barbara Upton and Beth Dulay at 11:50 AM No comments: